Translocation of 70kg male Eastern Grey Kangaroo from under a bridge after being displaced by pursuing dogs in Queanbeyan NSW.

An initial site assessment was made prior to the chemical capture of the male Kangaroo that was displaced due to being chased and attacked by dogs under a bridge on the main street of Queanbeyan NSW.  The large male kangaroo had sustained only superficial injuries, yet need to be captured and assessed prior to relocation to a safe environment. 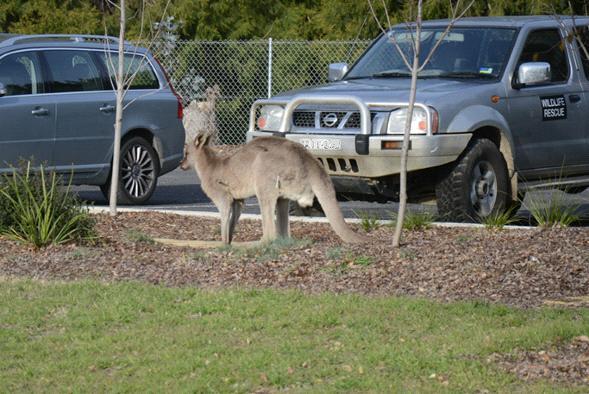 The Queanbeyan Police were notified that I was to utilise a tranquilliser firearm in a public place, and due to prior operational commitments I was entrusted to secure the area, and mitigate any possible risk while undertaking the chemical capture. A thorough safety briefing was provided to the onsite wildlife carer as to what was required to prepare the capture site and render it safe.  All pedestrian traffic was halted and the arch of dart delivery was rendered safe for chemical capture.

The appropriate dosage rate of sedation was calculated for a 70kg male EGK, drawn and loaded into the 2ml pneu-dart projectile ready for application.

The target was acquired from a safe acquisition point of 18 meters following an approach creep to the target. Distance was calculated as to provide the appropriate velocity to the projectile/ target animal as to alleviate any impact injury during the dart delivery.  The oblique target animal was successfully sedated and supine within 4 minutes, and ready for recovery and transportation prep.

During the preparation for transport phase, the target animal was assessed thoroughly for the injuries sustained during the altercation with pursuing dogs.  The injuries had caused localised infection that required additional Veterinarian intervention.  The large male EGK was provided Veterinarian care, and was released to the custodial carer who monitored the recovery of the kangaroo, in addition to providing required follow up antibiotics.

After successfully capturing and immobilising the EGK for transport and subsequent treatment, the male EGK, was translocated to the pre determined release site after a period of rehabilitation in an enclosure.  Upon release he joined several kangaroos at the release site. To this very day, he has still been sighted by the designated carer, and has gravitated between resident troops at the safe NSW release site.